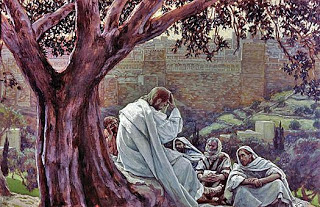 Message of the Kingdom

“Then you will be handed over to be persecuted and put to death, and you will be hated by all nations because of me. At that time man will turn away from the faith and will betray and hate each other, and many false prophets will appear and deceive many people. Because of the increase of wickedness, the love of most will grow cold, but the one who stands firm to the end will be saved. And this gospel of the kingdom will be preached in the whole world as a testimony to all nations, and then the end will come.” (Matthew 24: 9 – 14 NIV)

“Now learn this lesson from the fig tree: As soon as its twigs get tender and its leaves come out, you know that summer is near. Even so, when you see all these things, you know that it is near, right at the door. Truly I tell you, this generation will certainly not pass away until all these things have happened. Heaven and earth will pass away, but my words will never pass away.” (Matthew 24: 32 – 35 NIV)

“Who then is the faithful and wise servant, whom the master has put in charge of the servants in his household to give them their food at the proper time? It will be good for that servant whose master find him doing so when he returns. Truly I tell you, he will put him in charge of all his possessions.” (Matthew 24: 45 – 47 NIV)

I have quoted here from Matthew 24 because the words of Jesus, “And this gospel of the kingdom will be preached in the whole world as a testimony to all nations, and then the end will come,” are included here. These same warnings and teachings about the end are also included in Mark 13 and Luke 21. Generally speaking the scene involves the disciples expressing to Jesus their awe over the temple and Jesus’ reaction that not one stone will be left upon another. While sitting later on the Mount of Olives the disciples asked Jesus about when all these things should happen. These discourses about the end are recorded in these three places in the gospel narrative with slightly different emphases. For this article I used the quote from Matthew because I want to make the emphasis that our current job as followers of Jesus is to continue to preach the gospel of the kingdom until He returns.

Part of the reason I make this emphasis is that I have just finished reading a biography of Bonhoeffer. As you might know Dietrich Bonhoeffer came of age during the time between the World War 1 and World War 2 during the rise to power of the Third Reich led by Adolph Hitler. Bonhoeffer was a brilliant rising theologian greatly influenced by Karl Barth but with outstanding independent thinking which led him to the conclusion that we are to actively live according to the teachings of Jesus; especially as those teachings were expressed in the Sermon on the Mount. The practical outcome of my reading of Bonhoeffer’s life and of my personal study of Scripture and of my contemplations brings me to the conclusion that we are actively engaged in living and preaching the kingdom of God or we are not living according to what Jesus taught.

Let me not be mistaken in what I am saying. There have been many attempts to bring about some semblance of an earthly, physical kingdom of God in the form of community living or political dominance. By political dominance I mean that from time to time those in power have sought to bring about a physical kingdom of God by doing the opposite of what Jesus actually taught, lording it over others and forcing others to submit to their vision of what should be.

There was a teaching popular for a time from the period of the enlightenment that was based on the belief that the world would get better and better, the kingdom of God would become more and more dominant and obvious, and then Jesus would come to rule and reign in this earthly kingdom of God. This way of thinking was spoiled by two world wars, the Cold War, and a continual series of conflicts around the world ever since.

Yet, at the same time, the kingdom of God is preached, hearts are individually changed, and the kingdom of God does what Jesus said it would do, continually, invisibly expands. What I believe God is directing me to do is take this message to Kissi, Kenya, Africa, and establish a Bible School there to equip the saints to go forth with the message of the kingdom. I believe this is the fulfillment of the words of Jesus, at least for me, as He talked with His disciples on the Mount of Olives.